In some embedded systems space may often be a serious constraint. However, there are many such systems that contain several megabytes of flash either as an SD memory card, or as raw NAND, having no real space constraint. For those systems using a TLS implementation such as GnuTLS or OpenSSL would provide performance gains that are not possible with the smaller implementations that target small size. That is because both of the above implementations, unlike the constraint ones, support cryptodev-linux to take advantage of cryptographic accelerators, widely present in several constraint CPUs, and support elliptic curves to optimize performance when perfect forward secrecy is required. 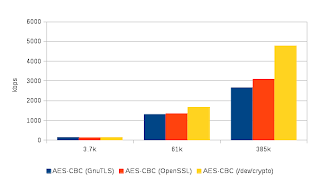 I happened to have an old geode (x86 compatible) CPU which contained an AES accelerator, so here are some benchmarks created using the nxweb/GnuTLS and nginx/OpenSSL web servers and the httpress utility. The figure on the right shows the data transferred per second using AES in CBC mode, with the cryptographic accelerator compared to GnuTLS' and  OpenSSL's software implementations. We can clearly see that download speed almost doubles on a big file transfer when using the accelerator. 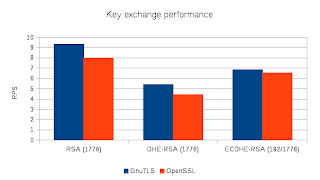 The figure on the left shows a comparison of the various key exchange methods in this platform using GnuTLS and OpenSSL. The benchmark measures HTTPS transactions per second and the keys and parameters used are the same for both implementations. The key sizes are selected of equivalent security levels (1776 bits in RSA and DH are equivalent to 192 bits in ECDH according to ECRYPT II recommendations). We can see that the elliptic curve version of Diffie Hellman (ECDHE-RSA) allows 25% more transactions in both implementations comparing to the Diffie-Hellman on a prime field (DHE-RSA). The plain RSA key exchange remains the fastest, at the cost of sacrificing perfect forward secrecy.

As a side-note it is nice to see that at the security level of 192 bits GnuTLS outperforms OpenSSL on this processor. The trend continues on higher security levels for the RSA and DHE-RSA methods but the ECDHE-RSA method is interesting since even though OpenSSL has a more efficient elliptic curve implementation. GnuTLS' usage of nettle and GMP (which provide a faster RSA implementation) compensates, and their performance is almost identical.

Overall, in the few embedded systems that I've worked on, space was not a crucial limiting factor, and it was mainly this work that drove me into updating cryptodev for linux. In those systems the space cost occurred due to the usage of a larger library was compensated by (1) the off-loading to the crypto processor of operations that would otherwise load the CPU and (2) the reduce in processing time due to elliptic curves.
However this balance is system specific and what was important for my needs would not cover everyone elses, so it is important to weigh the advantages and disadvantages of cryptographic implementations on your system alone.

Posted by Nikos Mavrogiannopoulos at 20:21

Email ThisBlogThis!Share to TwitterShare to FacebookShare to Pinterest
Labels: gnutls